I recently rearranged the furniture in my home work area in order to make better use of space, and, because I fancied a change.

When I have done this kind of thing in the past, I have used a simple vector drawing program to draw simple objects in plan form, and drag them around the room until I find an arrangement which works. This is OK, and much better than just moving furniture and hoping it will fit, but nowadays, my friends at TheCharmingBenchCompany.com hipped me to a better way.

So this time I tried out SweetHome3D, a free interior design application. The basic idea is still the same – you draw out the room after measuring it with a tape measure, and then you start putting in furniture. But the difference is that the furniture you put in the room isn’t simply rectangles, but 3D models from the library. You set all the dimensions correctly, and then you can drag the furniture around on the plan view just like in the 2D world. But there’s also a 3D pane in which you can see, in real time, what your new room design is going to look like.

Doing all the input took a little while (mostly spent with a tape measure) but was well worth it. I ended up with a much more efficient plan than I previously had, and just to put the finishing touches on it, the software was even able to ray trace a 3D image of the new room in higher quality than the real time preview, and I found it really useful to print out the 3D image as well as the 2D plan view and stick them to the wall of the room while working. 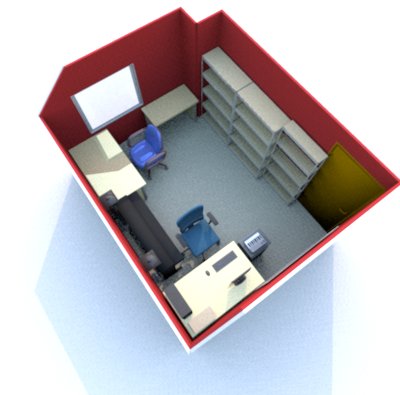 SweetHome3D is written in Java, and claims to be cross-platform.