This weekend saw the Space Expansion Party at London Hackspace. I brought along a laser pointer, and set myself the task of building a laser interferometer out of whatever I could find lying around.

I wanted to build a Michelson interferometer. This type of interferometer has been used to provide evidence for special relativity and to detect gravity waves, but its main attraction here is that it can be made with a small number of relatively simple components.

The parts required are:

I had with me a (very) cheap laser pointer. Sellotape kept the button held down so that the laser would stay on, and it rested comfortably upon a Greg Egan novel.

For a beam splitter, I eventually managed to find a CD jewel case. Hardly great optics, but it did split the beam.

There was a nearby drawer containing chunky electrolytic capacitors which made ideal objects to make stands out of. Sellotape and Blu-tack made it fairly easy to stand one of the mirrors up, and Blu-tack and a Helping Hand borrowed from the soldering station held the other mirror in such a way that it was possible to make fine adjustments to it.

The magnifying glass from the Helping Hands (again mounted with Blu-tack and capacitors) diverged the beam a little bit. Because the optical components are less than ideal, it’s necessary to magnify the image of the beam in order to see interference patterns in it.

There were a couple of hemispherical lenses lying around which served to further magnify the beam. One right after the first lens (again supported with a capacitor and Blu-tack) and another one Blu-tacked on top of a pint glass projected the beam onto a make-shift screen consisting of an A3 sheet of paper stuck to a floor-standing lamp.

Without using the sorts of optics that one would expect to find in a laser optics laboratory, this was never going to be perfect, but after turning the lights off we did notice that there were in fact interference fringes visible which moved around with the (quite considerable) noise and vibration in the room. 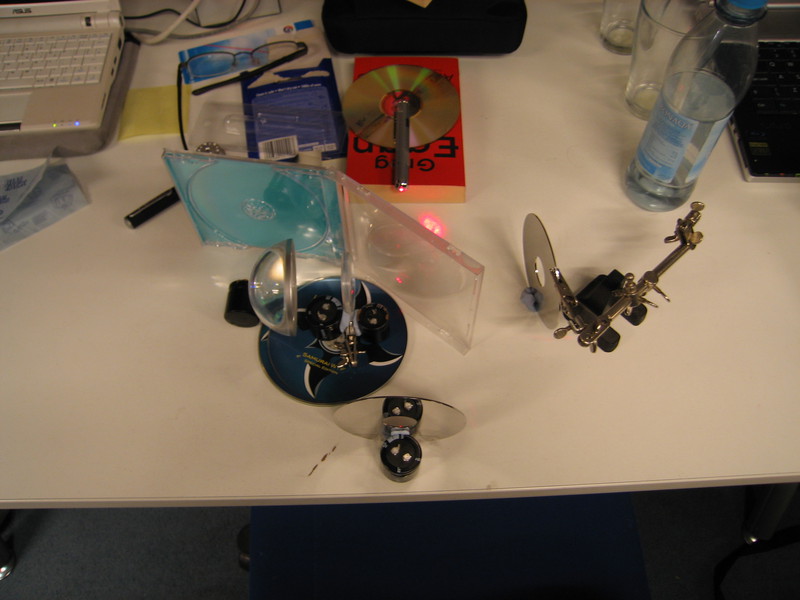 I found a fog machine so that I could take a photograph of the beam in the dark:

Finally, if you look carefully you can see the interference fringes here. The camera unfortunately doesn’t do a great job of picking this up. You’re looking for moving fringes (from tiny movements of the experiment) rather than the places where the whole beam moves quickly as a result of larger movements: